At first light Sunday morning, we snuck out of town before all the church bells woke everyone up (although how anyone could sleep through all the trains is a mystery). Our RV park was about 50′ from the tracks.

What a major disappointment this museum was! 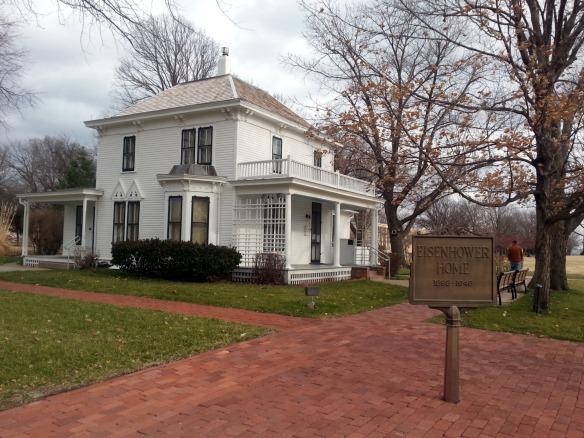 Probably 60% of it was devoted to Eisenhower’s military service and general WWII artifacts. If you like to read tiny print on large posters, this is the museum for you! Guns, tanks, military uniforms….you get the picture.

Finally, we get to the point – Eisenhower was sought by both parties to run for President, but the Republicans finally won him over..

Truman supposedly had told him that he would run as Eisenhower’s VP, if only Eisenhower would run on the Dem ticket. But, we all know that Eisenhower/Nixon was the winning Republican combo in 1952 and 1956. 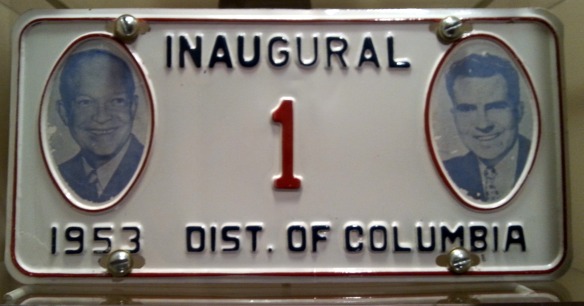 Curiously, it seems to me that he was a President with no agenda. No New Deal, Fair Deal, Great Society or anything like that. Just kind of an I Like Ike agenda. His enormous popularity as a war hero carried the day. 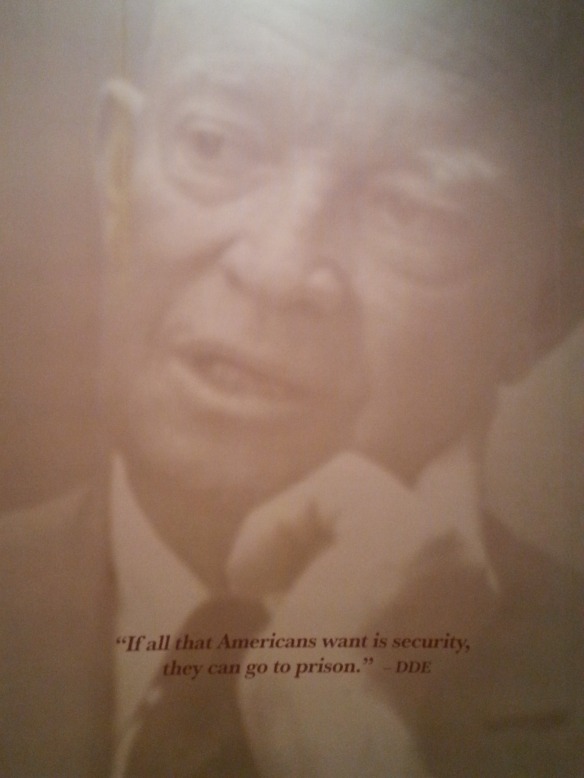 NASA was formed during his administration, the Interstate Highway System was started as well. Eisenhower favored integration, both of schools and the military, but it seemed to be a lukewarm effort. There really wasn’t much that stood out in the Museum, except Mamie.

We got a really good impression of her – always smiling and engaging, in direct contrast to the rather dour Bess Truman who preceded her.

Oh, Eisenhower was the only President to win an Oscar – for enlightening use of television as a medium.

We left the Museum without much of a portrait of Eisenhower as a President. So disillusioned were we, that we abandoned our plan to stay in Abilene, and so we moved on down the road for another three hours.

Unfortunately, that put us in Dodge City, KS – a place I swore I would never step foot in again. (Here’s a link to my post about our visit here)Ugh! But, our choices were very limited. We stayed at a campground, laughingly called Water Sports Campground. Perhaps it was named that because of the huge, deep mud puddles everywhere.

My new red Marmoleum floor took a whipping! We couldn’t get out of there fast enough in the morning. Check out some of our neighbors! 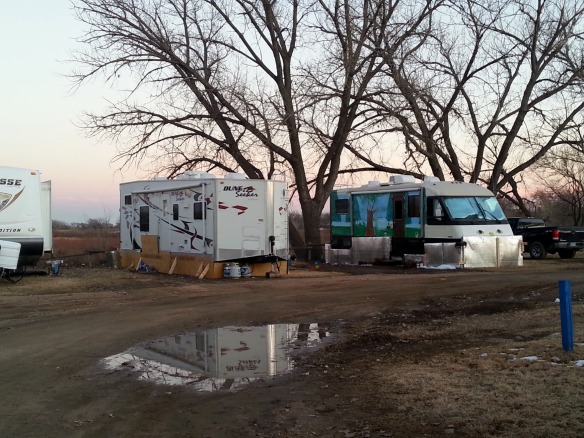 So, we can check Kansas off this trip. Next up – New Mexico. Bright sunshine picked up our spirits a bit, and we had smooth sailing down two-lane Kansas State Highways for mile after mile. Crossing into New Mexico, we opted to cut our travel day short and camp at Storrie Lake State Park in Las Vegas, NM..

No facilities of any sort. Pit toilets. We were the only campers there. We buried our noses in books and spent a very cold night in solitude.

Dark clouds and ominous skies greeted us Tuesday morning as we prepared to depart for Winslow, AZ.

Another long travel day, punctuated by howling winds and snow squalls. This was my first time driving/towing in the show and big wind. Tense? I had to pry my clawed fingers off the wheel when we finally stopped for gas, and switched positions. As we approached the AZ state line, we were greeted with this sight – behind the mountain was a bright white horizontal band of clouds, (just below the halfway point in the photo) outlining the mountains and mesa in the distance. It looked like a cloud tsunami! With the dark sky overhead, it was spectacular. My photo, shot thru the truck windshield really doesn’t capture the drama. 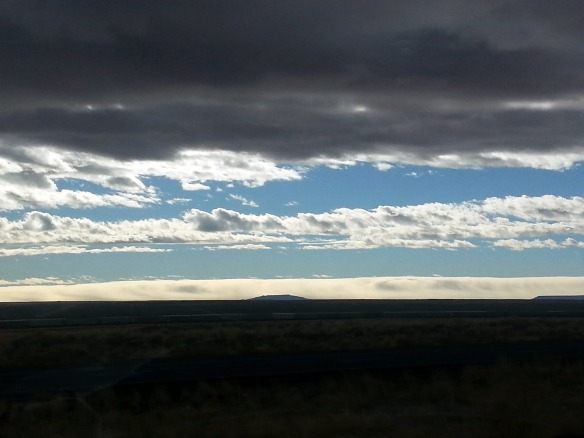 But, we got to Winslow in time to take Jezzy for a long walk in honor of her 10th birthday. So, we did the historic photo – you all know what this is about, right?

Another five hours of driving tomorrow, and we’ll (finally) be in Las Vegas. Merry Christmas to all – we’ll be hanging out with family, and NOT getting in the truck for a week!

This stop was all John’s idea, and I’m not going to let him forget it.  Here is a town whose time has come and gone.  But, it’s gone – no question about that.  We finally found a place that we have visited, and can scratch from our list.  I’m not coming back.

Wyatt Earp, Bat Masterson, Gunsmoke – it all sounds like fun, doesn’t it? 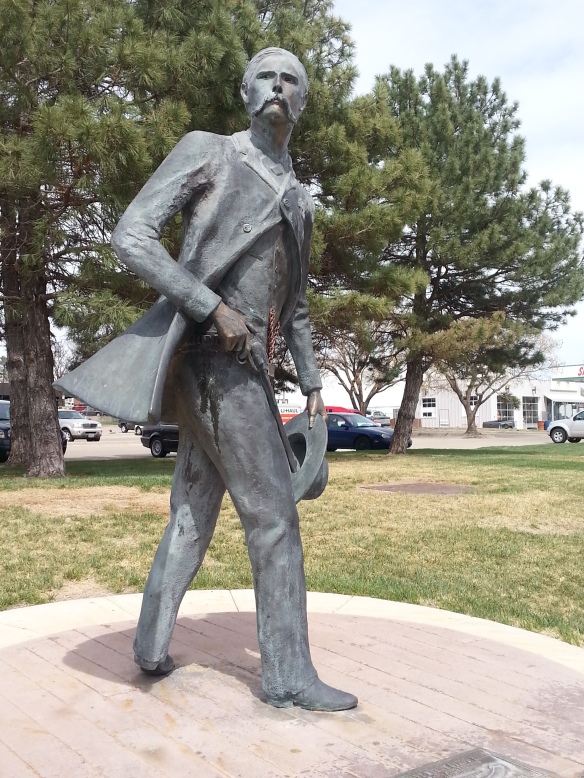 We headed off in the morning on our bikes, after it finally warmed up a bit.  It’s windy out here, and so dry. Makes the wind feel like it’s blowing right through you.  Our first stop was Boot Hill, a museum, and reconstructed gunslinger town.

There was only us, and two other old, tired couples there.  The famous Long Branch Saloon?  Empty!  The General Store? Empty!  Old bank, church, school, gun museum?  You know the answer.  The “cemetery” has a few fake wooden headstones, but even they’re not the real deal.

There are a few nice metal lamppost ornaments depicting the town.  Each was different – these were pretty nice.

Here’s an odd combination.  Of course, it was closed…. 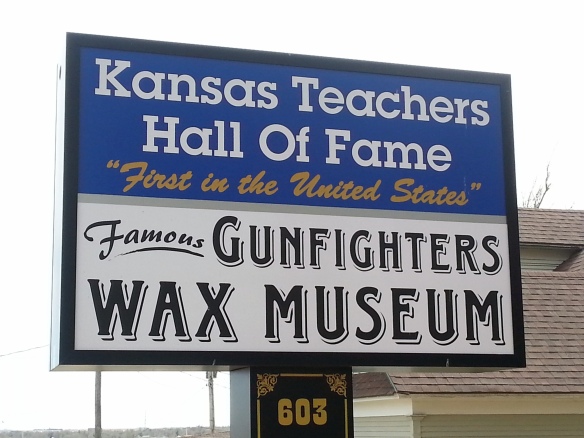 We cycled out to the very edge of town to the feedlot overlook – a view of many thousands of cattle who eventually will take their last walk across the street to the processing plant. One Texas Longhorn steer gave me a glance, but he was a distance off, and it was blowing so hard I couldn’t hold my camera steady enough to get a shot of him.  They are pretty impressive to see.  Dodge City has a history with cattle – during the 1870s and 1880s, over seven million steers came this way in the days of the big cattle roundups.

That’s about it. We didn’t see a house or any building that looked like it had been built within the last 30 years.  Maybe it would be more fun here when there are lots of tourists, and gunfight re-enactments in the street.  Sassy bar girls.  Gamblers.  Cowboys.  But, we won’t be back to find out.

My adventures in the woods, streams, rivers, fields, and lakes of Michigan

Shoving Books Into Readers' Hands Since 1958

Retired and Happy in Murrells Inlet

Working hard at enjoying my life

answering the call to explore....

However random it might seem, everything in this world has a pattern

Every Day is a Gift!

The latest news on WordPress.com and the WordPress community.

The Badger and the Whooping Crane

News about Wisconsin's wild places and whooping cranes, and the people devoted to both

On The Move
Adventures in Natural Beekeeping

Bees, Hives, Swarms, and Everything under the Sun

jammin' on down the road