The first Canyon views bring a gasp of amazement. Can this be real? Is is some kind of lighting trick?

Reality set in, and my head swiveled from side to side to take in the extraordinaryness that is Bryce Canyon. My second thought? I don’t have the camera or skills to capture this. I wish I had a stereo, or 3D camera.

Our three-night stay in the North Campground turned into four, as we swiftly figured out that we couldn’t possibly drink in all the sights in such a short time. I don’t know how much time would be enough, but we didn’t reach that limit. At Bryce, the attraction is the hoodos, those tall skinny spires of rock that reach up from the Canyon bottom and are wind and weather eroded into spectacular formations.

Some have names, such as Tower Bridge.

Others set your imagination reeling with images from your own knowledge. Some days, we shuttled to trailheads on the amazing bus system, and bicycled back and forth other days when it suited us. It was always cold in the morning, warming up into the mid 60’s – 70’s during the day. Spectacular winds blow through the Canyon, swirling dust devils through the air. Parents clutched their kids, and everyone hung on to their hats. John convinced me to step out to precipice for a photo op. I had to brace myself from being blown off the edge, and hang on to my favorite hat at the same time.

We hiked the northernmost trail (Fairyland Canyon) and the southernmost trail (Bristlecone), and several inbetween those two. The details of each day have already blurred, so I’ll just share a few of my favorite photos.

Even if you never hike, amazing views can be had from the Rim Trail which travels along the 18 mile length of the Canyon. Take the shuttle, jump off and on and you please. 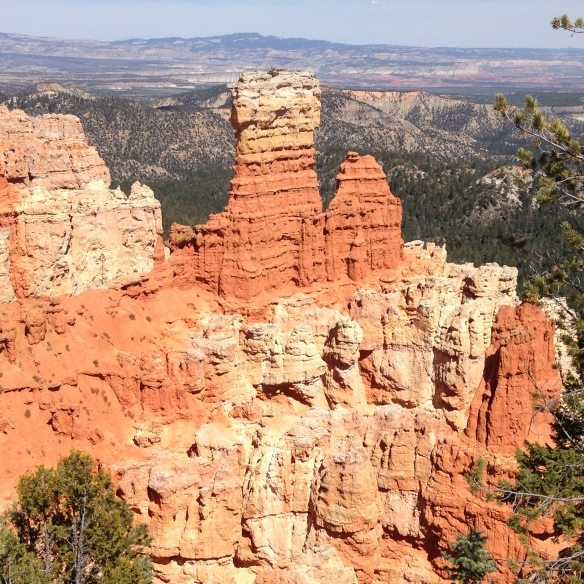 Even the jet contrails above Bryce resemble hoodoos. I was sorely tempted to turn this photo upside down to make my point, but you’ll get it anyway.

But we did observe many in varying stages of life, and felt privileged to do so. We saw some variety of spruce that was forming cones, and the branch tips were bright pink. Perhaps it was new branch growth, but it appeared to me to be cone formation with the striking color. A visit like this will remind you of all you do not know, and probably will never really understand.

Now we have seen the oldest (Bristlecone), tallest (Coastal Redwood), and largest (Giant Sequoia) trees in the world. My heart still belongs to the Sequoias, but it quiets me to be in the presence of any of these giant trees.

I have so many more photos that I perhaps will share on a separate photo-only post, if I find a place with some good WiFi. A post like this gobbles up an amazing amount of our monthly data plan. ;-)

Our post-Bryce plan was to camp on BLM land in nearby Grand Staircase-Escalante National Monument. But, we awoke to snow and freezing rain. We packed up our stiff and frozen awning,  and rolled as quickly as possible to a lower elevation. As we dropped down (over 3000′ for the day), the snow turned to sleet, then to sunny breezy 50 degree temps, then back to rainstorms as we reached Kanab, UT. The knowledgeable Ranger at the Visitor Center there advised us not to venture onto any of the backcountry roads, as the storm threat and past rainy weather had made the roads unpassable for two-wheelers such as us. She showed us where we could find a great camping site just off a paved road, which we checked out. It was raining by the time we got there, and the deep ruts in the clay site were enough to scare us off camping there for the night. There are signs everywhere warning of impassable roads under rainy conditions. We headed back to an RV park in Kanab. It’s probably a good thing, since it’s been raining steadily for six hours since. One bad experience with a tow truck has made us wary of volunteering for another

Tomorrow, we plan to venture back up into Grand Staircase to see if it’s possible to actually stay and explore for a night or two. But, having had one bad towing experience, we’re not about to expose ourselves (willingly) to another. We may roll eastward. Destination unknown.

My adventures in the woods, streams, rivers, fields, and lakes of Michigan

Shoving Books Into Readers' Hands Since 1958

Retired and Happy in Murrells Inlet

Working hard at enjoying my life

answering the call to explore....

However random it might seem, everything in this world has a pattern

Wandering around Georgia and beyond

The latest news on WordPress.com and the WordPress community.

The Badger and the Whooping Crane

News about Wisconsin's wild places and whooping cranes, and the people devoted to both

On The Move
Adventures in Natural Beekeeping

Bees, Hives, Swarms, and Everything under the Sun

jammin' on down the road