Has it really been two weeks since I last posted? Joshua Tree seems like a distant memory, but I’ll try to recreate the high spots of that, and our travels since.

Our hideway site in Joshua Tree was perfect. We love being tucked in among the rocks in such an unusual landscape. We called this our King Kong Kampsite.

Everywhere you look, there are people scrambling up and around these crazy boulders. They have a stubbly granite surface which is very grippy, which makes it easy for one to feel like Hillary on Everest. Well, we didn’t actually get very high off the ground, but it feels high. Green Valley pals Deb and Tony joined us for a day of scrambling around in the sun.

There’s a vast difference in the scenery between the east and west side of Joshua Tree. We decided to wander over to the west end for a hike, and couldn’t have been more amazed at the difference in scenery. No granite boulders, but Joshua Trees everywhere (go figure!) There was so much greenery!

The Panorama Loop hike was our destination, and we were undeterred by the Ranger’s warning that the forecasted 50mph wind gusts could be a problem on the exposed mountainside. Ha! I thought. The first blast that hit me in the face made me want to drop on all fours for safety. But the views were incredible.

Snowy peaks were visible across the Cochella Valley.

Descending back to the Trailhead, we passed what must be the granddaddy of all Joshua Trees.

Next time we visit the Park, we may camp on this end to make further exploration a bit easier.

We spent two nights cold rainy nights in the Oak Grove Campground in the Cleveland National Forest. The weather dampened our spirits a bit, but the 40 or so Boy Scouts there for the weekend seemed to have a great time. As they were packing up to leave, I could only imagine how exhausted the leaders must have been. Organized chaos.

On the way to our next stop, we passed by an incredible sculpture place. Who could pass by this spot without stopping to see these treaures?

There was a full-sized stage coach, complete with passengers AND four horses that was jaw-dropping. I bought a $10 ladybug for my garden in exchange for the time we spent viewing these amazing artworks. I’m ashamed to admi that I lost the card with the name and location of this fabulous sculptor. But, you will recognize it if you pass by, for sure.

Get us to the beach! We were craving some warm sunshine, and figured that our next stop at San Clemente State Beach would be just the ticket. While we did get the sunshine (for the most part), the warmth eluded us. But, it was perfect for beach walks. Watch out for sharks! From a rocky outcropping about 150 yards off shore, we could hear seals barking, although we could only see them with our binoculars. 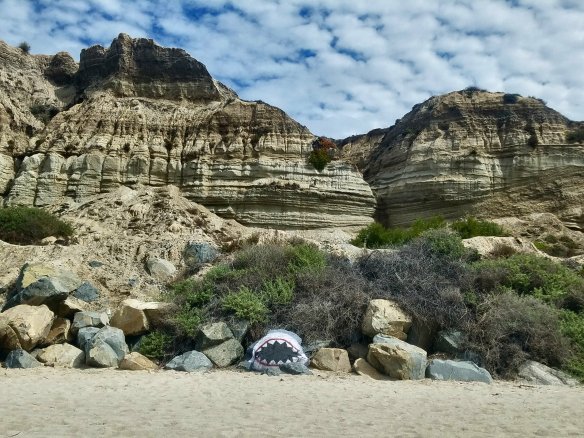 I probably never would have heard of San Clemente if it weren’t for the fact that Nixon’s Western White House was located here. Seems crazy that I can walk on the beach and see it, but here’s the view of it from the beach. 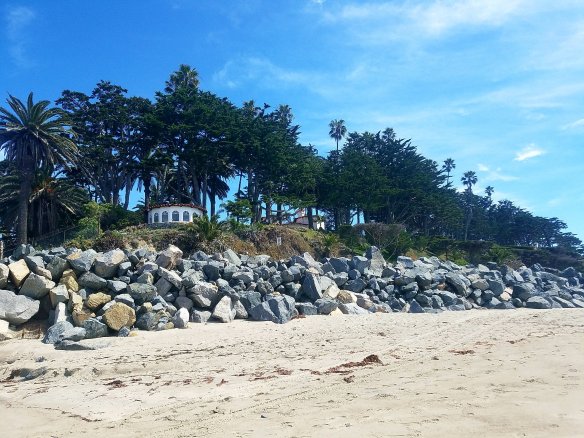 Old photos in the visitor center show that, during Nixon’s years, it was the only house along the bluff to the south of the State Park. Now it’s jammed with houses of all shapes and colors. Surfers still reign here – there’s a nice beach-y vibe to this area that we like a lot. 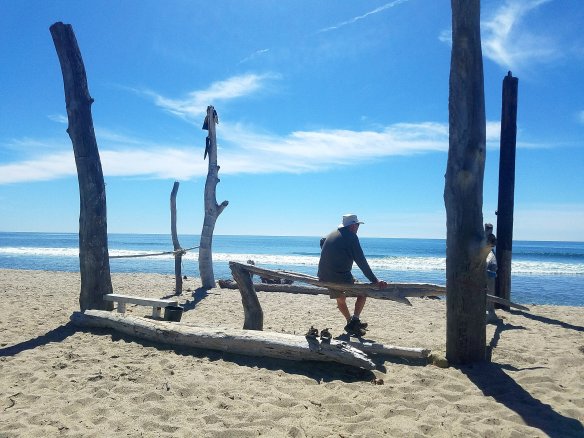 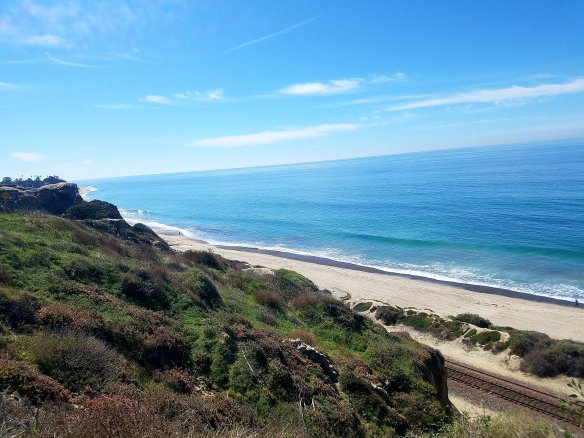 How is it possible that it’s been weeks since we actually have ridden our bikes? We decided to visit San Juan Capistrano, and utilizing the miles of bike paths seemed to be the best way to go. The wide packed-sand multi-use trail along the beach is a blast on a bike.

It’s busy with walkers, gawkers, surfers, and moms with strollers. This photo makes that statement look like a lie, but we did find a non-congested stretch or two. Along the way were a few great viewpoints.

The busy highway also has its own separate two-lane bike path and pedestrian walkway.

Many of these California communities have made it easy to stay fit – there is a genuine vitality here that we just don’t see elsewhere.

The Mission at San Juan Capistrano is the summer home of cliff swallow, which migrate each spring to SJC from Goya, Argentina – a 6000 trip. March 19 is the ‘official’ return date. We were there on the 20th, and there was nary a swallow in sight. Hope they made it back in time for the official parade and Festival scheduled for the 23rd.

The Mission is a gorgeous place. Parts of the original church were destroyed only six years after completion by the earthquake of 1812. The alter from the back wall was saved, and appears in one of the photos below. It’s spectacular. 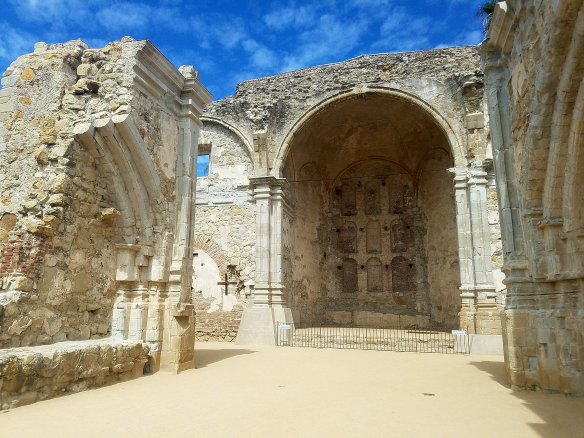 Portions of the original structure still stand. I had to laugh at the two girls taking glamour shots of themselves in front of  the old section.

People and selfies – it’s out of control! The Mission seems to do a brisk tourist business – it’s beautifully restored, and worth the few dollars it takes to visit.

No bicycle outing would be complete without a brewery visit. Docent Brewing, an IPA temple, fit the bill perfectly! We had fabulous brews and sandwiches. One of the best brewpubs we’ve ever visited – and we’ve been to many!

We just bummed around the rest of our five San Clemente days. Sometimes it’s nice just to be lazy. There weren’t many campers in our area of the campground – most of the showers and bathrooms seemed to be locked. A few of the others seem to be inhabited by the regular gathering of homeless folks to live in the Park during the day. Most would leave for places unknown for the night, returning faithfully at 7am the next day when the Park reopened. But a few locked themselves into the individual bathroom stalls for the night. While we weren’t ‘inconvenienced’ by this, it did make me a bit uncomfortable. The worst part of it were the ones who smoked – nothing worse than using a stinky, smoke-filled bathroom. I can’t believe the Rangers aren’t aware – there must be a tacit agreement to overlook this inhabitation. As you can probably tell, I’m kind of conflicted about how I feel about this. It was creepy knowing that people were sleeping in the bathrooms all night long, although I have a lot of sympathy for their plight.

One new thing we did see here were these food recycling bins, which look exactly like the regular green recycling bins at many facilities.

Seems weird to just dump food scraps – apparently we weren’t the only ones who weren’t used to this, as these green bins had more cans, plastic bottles, and cardboard boxes than food scraps in them. Ironically, there weren’t any recycling bins in the Park anywhere that we could find, which just magnified the confusion.

We couldn’t have moved on to a more different location – from sea level to 5500 feet at Mt San Jacinto State Park, a gem of a campground in the San Bernadino Mountains, near the town of Idyllwild. 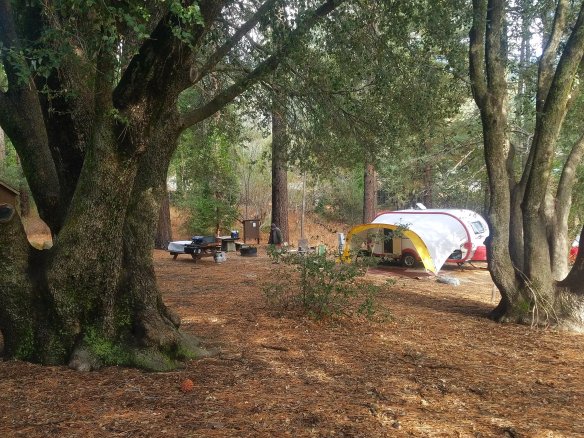 It’s cold up here, in spite of the brilliant sunshine. Although nearly deserted when we arrived, it filled up yesterday with hikers from the Pacific Crest Trail, which crosses a few miles from here. This perhaps is one of the nicest, most pristine campgrounds we’ve visited – the bathrooms are spotless, and there’s not a speck of litter anywhere. It’s definitely someplace we will return.

We hiked up the Devil’s Slide yesterday, enjoying panoramic views from many places on the trail.

Fabulous hike – about five miles roundtrip, with 1700′ of elevation. There are many places where the effects of the constant wind were evident. Tree trunks have been twisted by the constant forces of wind and sun. They are swirled like a barber pole. 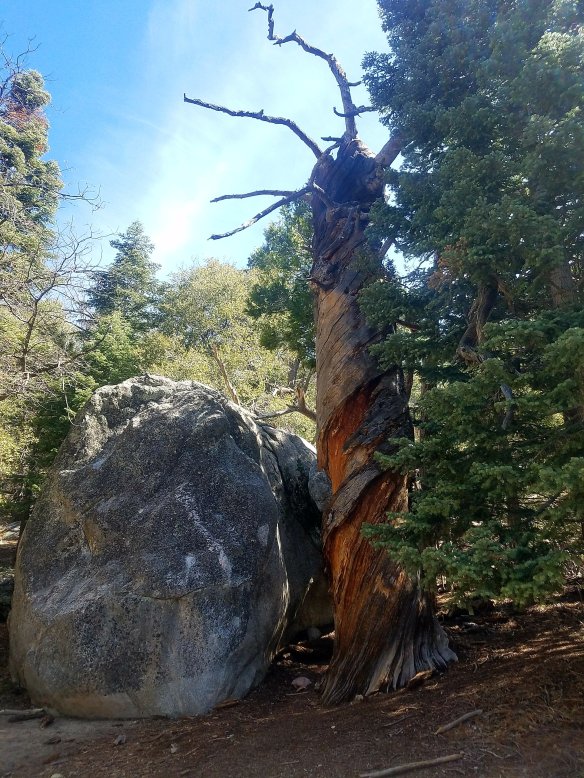 We were above the snowline when we reached about 7300′, and with a brisk wind and temps in the 30s, the snow sure wasn’t melting any, even with all that sunshine. This was the first time we have hiked anywhere where a Backcountry Wilderness Pass was required. There’s no fee for the permit – I think it’s more of a counting device.

We wanted to find a hike where we could take Jezzy along – our 94 year old pup (human years, according to our DNA report) has slowed down significantly in the past year. About four miles is her limit, and we try to keep it to an easy stroll. The Iyllwild Nature Center seemed like the perfect place to do that. What a gorgeous county park, complete with its own campground. We would definitely consider it next trip. We found these gigantic pinecones – that’s John’s iphone alongside for size comparison.

Jezzy also located a mortar rock, used by native peoples hundreds of years ago to grind grains, or in this case probably acorns, for food. With the accumulated water from the recent rains, the depressions really stood out.

This is our last night in California. We cross the State Line tomorrow back into Arizona, and begin our slow trek back to Michigan. As always, we have the feeling that much has been left unseen and undone. Pretty sure a return trip is in our future.