It was with relief that we moved to the cool, clear air of Payson AZ from the yellowish smog of the Picacho Peak area. Being at a much higher elevation (about 6000′), it seemed obvious that we should spend our time exploring the many hikes in the area. So, we did.

Our base for four nights was the Houston Mesa Campground in the Tonto National Forest. Other than the Camp Host, we were the only campers in this 100 site campground. What a change from the packed Picacho Peak State Park! This campground is a gem.

Day One: The first hike we selected was a bust. Called the Monument View hike, we hoped for something with sweeping vistas of the Mogollon (Muggy On) Plateau. Nope. What we got was a walk through a hard-packed ravine where trail motorbikes must often race around.

It was quite a disappointment. The best thing was this huge boulder alongside the road. It was impressive, just sitting there all by itself.

The rest of the hike? Meh…

Day Two: It seemed like a good idea to take a hike with a bit of elevation involved, since our legs had finally recovered from hiking at Picacho. So, the Military Sinkhole Trail seemed like an obvious choice. 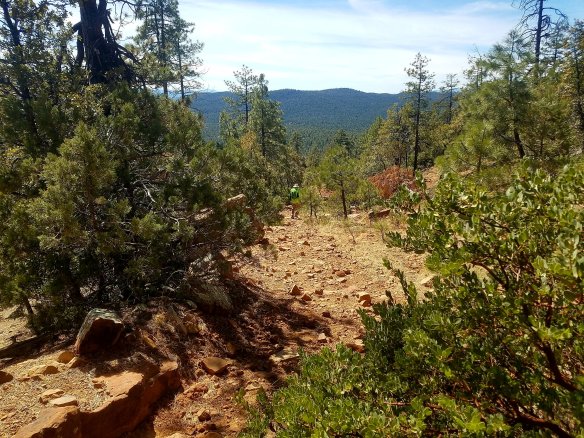 We started at the bottom, and hiked a rocky trail up and up. 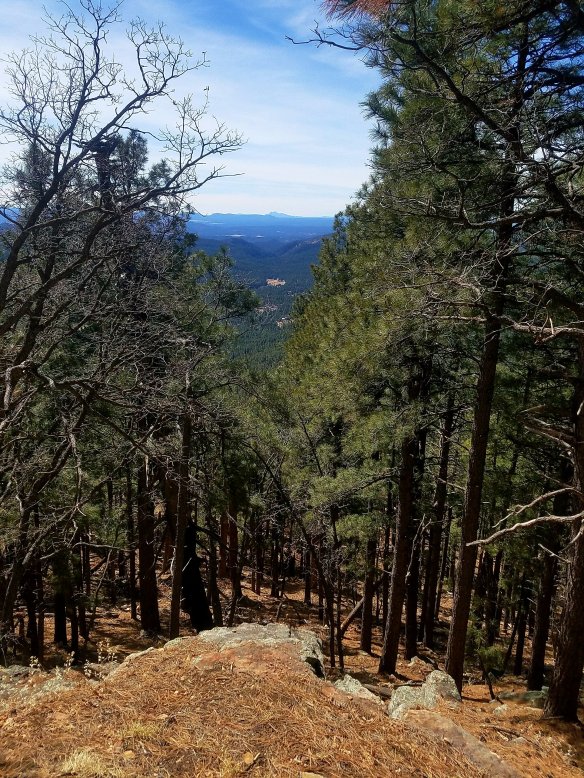 The number of downed trees in the forest was amazing – I understand now how all this brush can fuel a forest fire – some of these trees had obviously been down for years, if not decades. 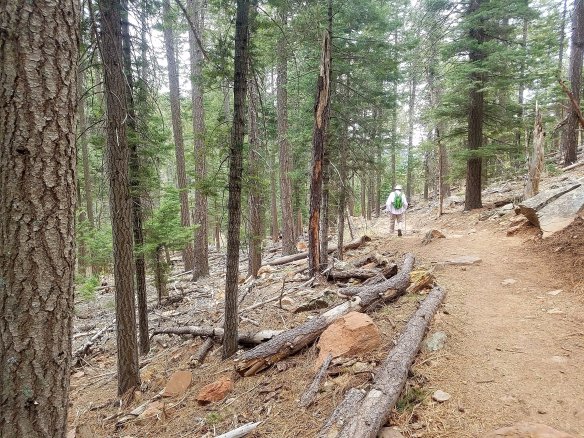 Thick carpets of pine needles and leaves made the path soft underfoot. When we finally arrived at the top, we were puzzled as to where the sinkhole actually was. John consulted Google, and we located it across the street from our scenic lunch spot.

Sadly, the sinkhole itself wasn’t photogenic in the least – there really was nothing there to see. But, what a gorgeous hike.

Day Three: The most popular hike in the Payson area is the Horton Spring Trail, according to Alltrails.com. Why not? This was totally different than the other two, as it followed Horton Creek up to its source. For four miles we followed along the rushing, cool creek – past small waterfalls and rocky outcroppings in the creek.

At one point, we passed two large wooden teepees. This photo doesn’t do them justice – somebody had to work hard to erect them – the logs in the big one were huge! I’m hoping it was a Scout project of some type – I really wanted to wade across the creek to examine them more closely, but there just wasn’t a spot where I felt I could cross without likely falling and filling up my boots!

Horton Spring is at the end of the hike – the water pours out of a rock from an artisan spring. Amazing. Most of my photos were a bust, so just take my word for it that it’s a gorgeous area, and a cool walk in the woods was the perfect activity for the day.

We were really sad to leave the Payson area after four nights. There’s a lot to explore here, and the cool air was much to our liking. But, we had a return date at Lost Dutchman State Park for a few nights. We took in a Cubs spring-training baseball game (Cubs beat the LA Angels 6-1). In case I don’t get to see the Detroit Tigers this year, this may have to satisfy my baseball game watching urge. We had pretty mediocre seats, but it was still fun.

Lost Dutchman has a trail that has intrigued us since the first time we saw it. It reaches from the campground up to the Flatiron – a peak at about nearly 3000′ above.

In a distance of about 3 miles, that’s a lot of elevation! It truly was the hardest hike I’ve ever done – the Trail was crowded with adventurers on a Saturday morning. There were even some paragliders out early on that Saturday morning. You can barely see one of them in this photo.

The crowds made things easier and harder at the same time. It was beneficial to have others around to point out the best handhold or route up an uncertain path, but it also led to a few logjams where we had to wait for our turn to haul ourselves up a particularly rough area. It took us exactly three hours to get to the top, and my legs were like jelly! Wow – what views! But, I never want to hike that one again. Once and done! 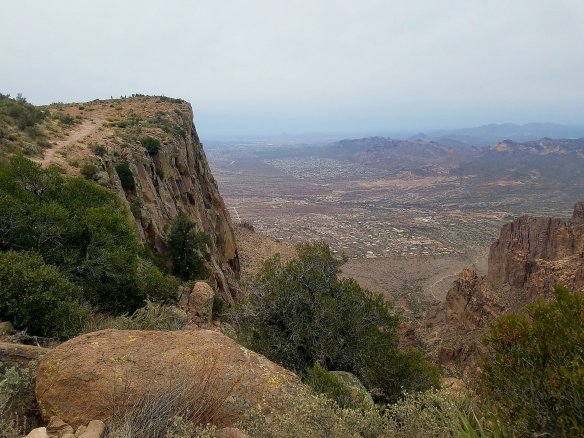 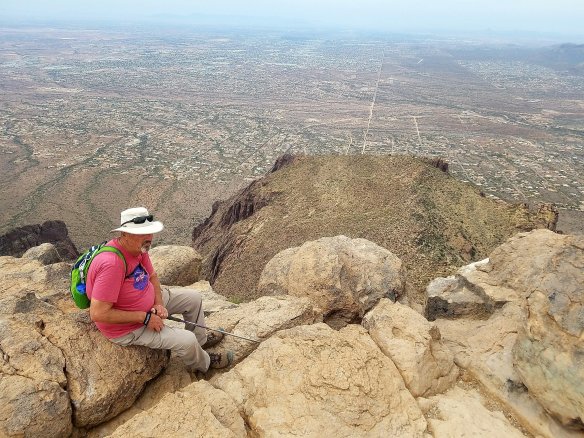 Now we’re holed up at Indian Cove Campground in Joshua Tree National Park. It would be tough to find a more beautiful campsite.

We’ve got five days to explore the area – revisit a few of our favorite spots, and find a few hidden gems.