Since leaving StinkBugLand, aka Ohio, our camping fortunes have greatly improved. We wandered across the border into Virginia, and holed up for three nights at Stony Fork Campground in the Jefferson National Forest. A green shady (mostly) quiet oasis. After just a few days on the road, we were already mighty tired of peering through the windshield. A few days in the woods were exactly what we needed.

Sadly, I don’t have photos of this campsite, due to my own incompetence and lack of understanding between the relationship of my Android photos, Google photos, WordPress, and (perhaps) Windows 10. Stuff I thought was uploaded has disappeared. Oh well. Wait, John had one – here it is.

We strapped on our hiking boots and hit the Seven Sisters Trail for some much needed exercise. Although big panoramic views were blocked by the trees, we enjoyed the ascent and stroll along a winding ridge, up to an elevation of just over 3300′. Happy feet! 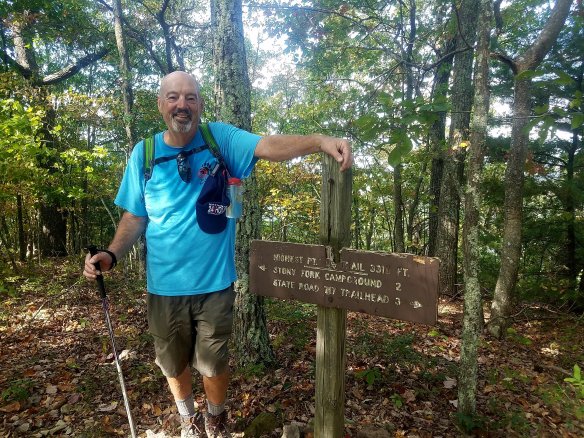 Some of you readers may have seen a Facebook post from this location, where I mentioned my displeasure with one aspect of this campsite. In a National Forest campground, the policy apparently is that camp hosts MUST blow leaves from the streets using. While this was roundly discussed on the FB pages, I still am amazed at this policy. To blow leaves off the streets in the forest seems stupid and needlessly disrespectful of the quiet nature of camping in the woods. The arguments about safety, potential lawsuits, and the beauty of a pristine setting unsullied by leaves on the street just don’t cut it with me. It’s a Forest! Leaves fall. Let the wind push them around, but leave the gas-powered blowers off.

After two days of sitting in the woods, we decided to venture into the nearest town for a meander, and to gather a few supplies.First, we headed to the Walker Mountain Lookout, where we paid $6 to climb a tower a few hundred feet up into the wind. 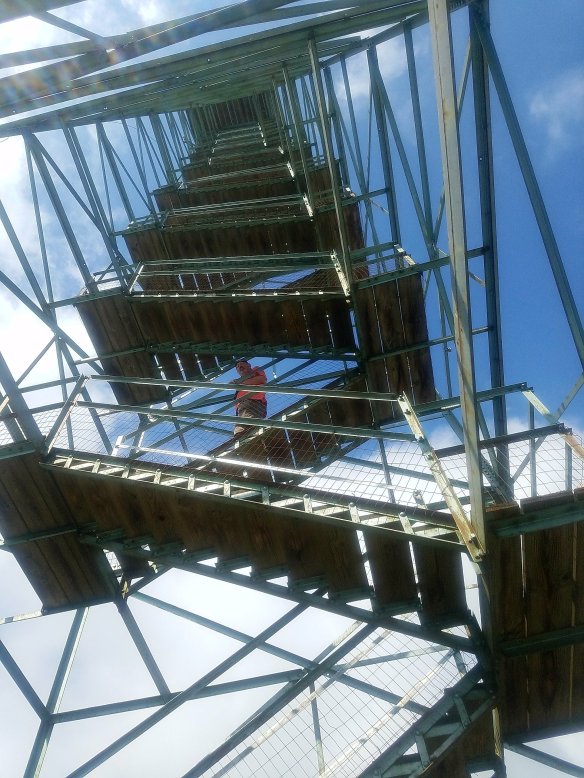 The views up there were incredible, although the wind velocity made me a bit uneasy. I could imagine myself sailing over the fence like a Yugo over the Mackinac Bridge.

On into the town of Wytheville (pronounced Withville), we went. Of course, that meant a stop for a hotdog at historic Skeeter’s (over 9 million hotdogs sold!). 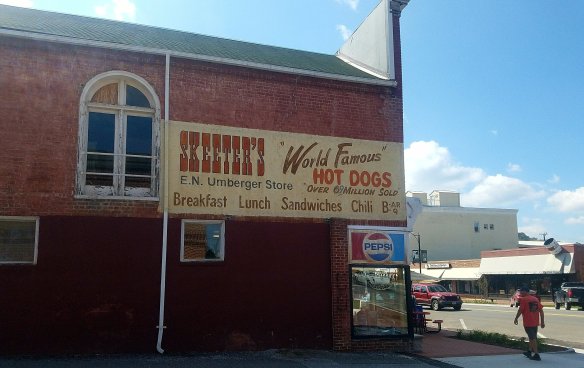 While perched at the lunchcounter enjoying our hotdogs, we learned that the Skeeter’s building was the childhood home of Edith Wilson, the second wife of President Woodrow Wilson. In fact, next door was the Edith Wilson Museum. Of course, we had to go in, where we were greeted by one of the most enthusiastic, theatrical volunteer docents we have ever met. We watched the ten minute film, explored the artifacts, and learned a bit about the only First Lady ever to come from Appalachia. It was a quality afternoon.

Next up is Jordan Lake Recreation Area in Pittsboro NC, where we once again joined up with a gang of folks with T@DAs and T@Bs for a few nights. We were impressed with the quality of the campground at Jordan Lake, a State Park. We had a huge site with our own private little water’s edge sitting area. 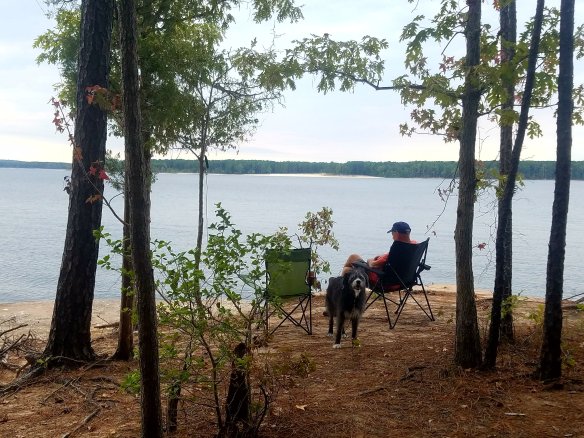 Most of our friends were all in the electric/water sites, while we chose a site in the rustic area, relying on our solar panels to keep the lights on and refrigerator running. With just a few tent campers for neighbors, it was calm and beautiful. 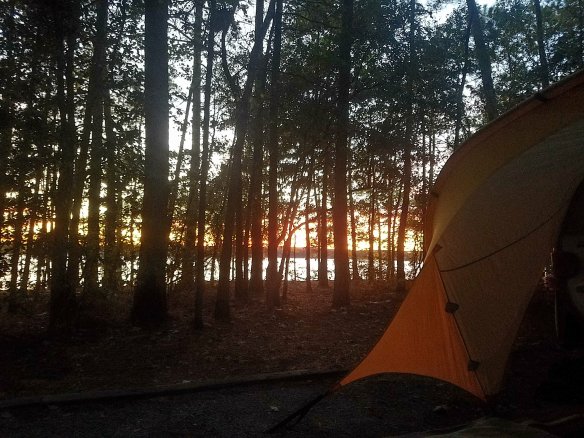 We did the usual catching up with old friends – sharing potluck breakfasts and happy hours. Here’s a photo of our hostess Jen with her ‘Easy Bake Oven’ – a propane campstove/oven combination. 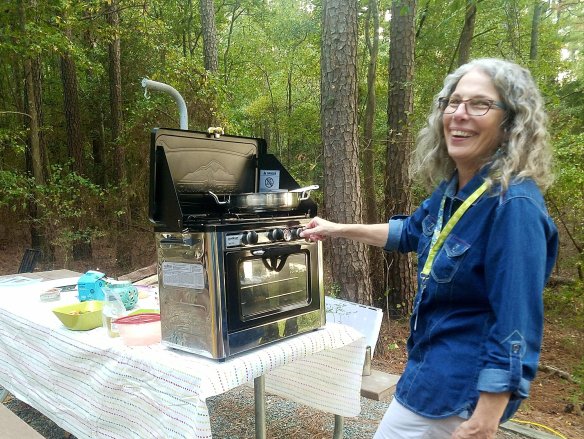 John and I laughed about how shiny and undented it was, knowing that if it were ours, it surely wouldn’t be so pristine! A few other folks brought bikes, so we wandered off on Saturday morning for a 30-mile roll. Perfect weather and a lively pace made it a great ride. We met lots new friends, and picked up info on a few promising-sounding campgrounds for future visits. We find that folks camping in small trailers like us are an agreeable and friendly group, and we’ve made many real friends among them.

Now it’s Sunday afternoon, and nearly all the other campers have left, headed toward home and Monday workdays. We’re here for one more night, then we’re going to move on to nearby Raleigh to explore the state Capitol, and nose around a city that’s new to both of us. After that, we’re pointed to Asheville, southern NC, then on toward Atlanta.

Hoping for better luck with photos and technology!