Our trip to the Plains has been enlightening, to say the least. I have been amazed by the dazzling beauty of the land itself out here, and by the history lessons that present themselves every day.

As we headed toward the Badlands, we detoured to visit Wounded Knee, site of the 1890 massacre where 150-300 men, women, and children of the Lakota nation were killed by the 7th Cavalry.

Although it has been designated a National Historic Site, it’s a pretty grim site. The cemetery is overgrown, panhandlers selling trinkets and asking for money gather around the few visitors, and the small tribal museum/information center there has fallen into disrepair.

Apparently, there is a Wounded Knee Museum in Wall, but we didn’t get to that town.The cemetery there is still in use today, and we saw many graves with the same family names. 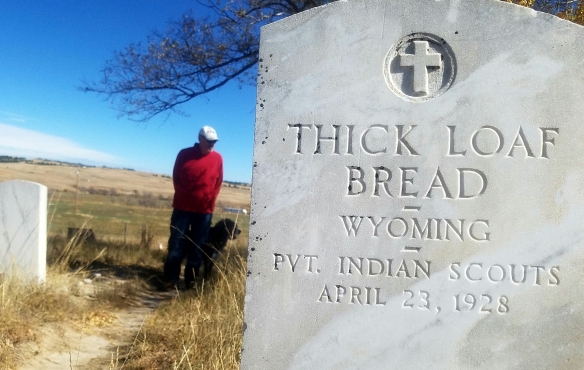 I left with the resolve to read some of the books I’ve gathered about the plight of Native Americans, and the history of our relations with them. Seems like it would be impossible to feel good about any of this.

We really didn’t have any expectations about the Badlands, other than we knew it was a National Park with some pretty unusual scenery. Unfortunately, we found the campground closed – we had to camp in the Group Campgroound.

It was ok, but lacking in ambiance. Turned out to be a good spot for John to fly his kite.

The setting sun also lit the rocky landscape with a beautiful glow.

Although we couldn’t see it, there was a huge prairie grass fire nearby along I-90 – about 10 miles long. We could smell the smoke (actually, we thought it was our neighbors smoking outside!). A few days later, we were amazed to see the blackened prairie, running for miles along the roadside.

I’m not sure how to describe the scenery here.

The Scenic Drive runs along the north edge of the Badlands, and divides it from the National Grasslands which it borders. The difference is very stark – check out this video. I stood in one spot, and simply pivoted about 270 degrees.

Canyon to Grassland – it’s eerie. We hiked and stopped at every scenic turnout or viewpoint along the way. Each offers a unique perspective. The grasslands here were home to many homesteaders, lured by the prospect of 160 acres of free land, which turned out to be too dry for farming, and too small to support any ranching. It’s uniquely beautiful, and terrifyingly desolate at the same time.

Next, we headed to Pierre (pronounced Peer), in our quest to visit State Capitols. Our campground was a small downtown park, right on the Missouri River. While lacking in amenities, it was a terrific location – we were less than a mile from the City center, making it easy to stroll, and leave the truck and Fireball at camp.

For a state with a small population, the State House was surprisingly elaborate. 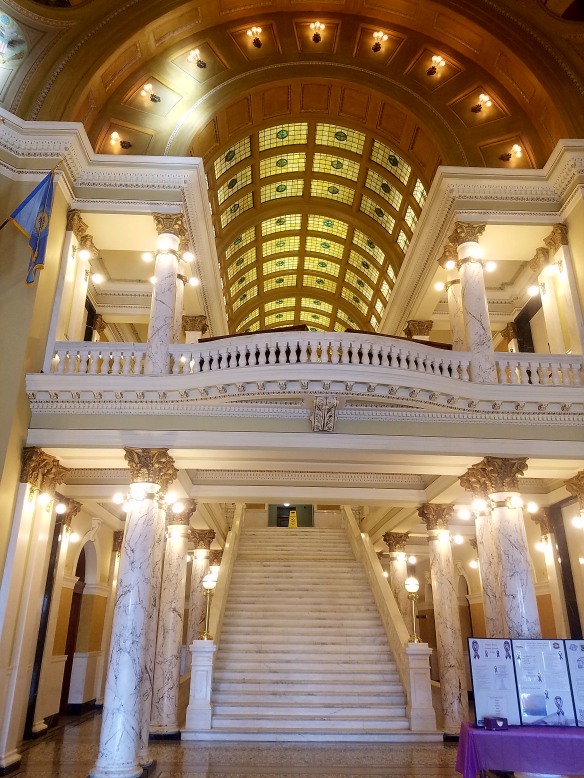 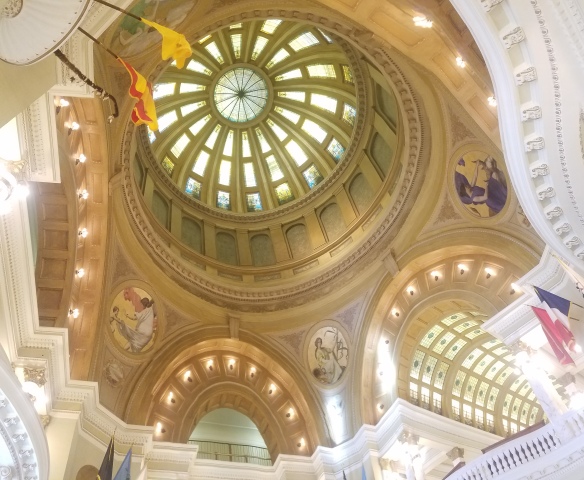 They sure didn’t skimp on the use of Vermont marble in this building. Although they didn’t photograph well, I loved the gigantic marble drinking fountains, with their shiny brass fittings. So far, we have loved visiting state capitols – they are architectural gems. My favorites have been Utah, Pennsylvania, and Massachusetts. We are resolved to visit our own capitol in Lansing – John has never been inside the building, and I haven’t been there for at least 30 years.

Who could visit South Dakota without seeing the Corn Palace in Mitchell?

What a crazy idea – to build an arena, and decorate it with murals constructed of corn and native grasses. And, change the murals every year?This year’s theme is American music – many of the previous years had themes which centered around Native Americans and life on the Plains.

Corn, in a dozen different hues, is cut vertically through the cob, then nailed or glues into the murals. It’s fun, creative, and a unique bit of American kitsch. I didn’t know that, at one time, there were more than 30 such buildings in US towns. Mitchell bills itself as the ‘only’ Corn Palace today.Apparently, the turnip-shaped structures on the roof were replaced this year with a metal structure that must have some kind of light show on it. Don’t know how anyone else feels, but I really don’t like the new look.  A bonus? Mitchell was also the home of George McGovern – one of my early political heroes. I remember proudly casting my first vote for US President for him.

We’re at the point where we’re on the road every day, heading home. It’s been a good trip, but we have house and yard stuff calling us home. Even Jezzy is starting to act a bit grumpy – she sure doesn’t care much for being cooped up in the truck so much.

We’ve got one more major sight to see, but should be home in three more days. I’m going to keep you in suspense as to what it might be….;-)