After days (or maybe a week without basic services) we find ourselves at an RV park just on the southern edge of Santa Fe.  Electric! Water! Sewer! WiFi! (probably the piece of this that we appreciate the most).  It’s our style to hang out in RV parks, but sometimes it’s all about location.  We want to explore Santa Fe, and don’t want to drive.  This park is right on a bike trail, not 10 miles from the city. Right up our alley.

If you’re not into photos, proceed no further. This is a big city with lots of BIG history. It boasts the oldest known house in the country (how telling that it’s a now a real estate office) 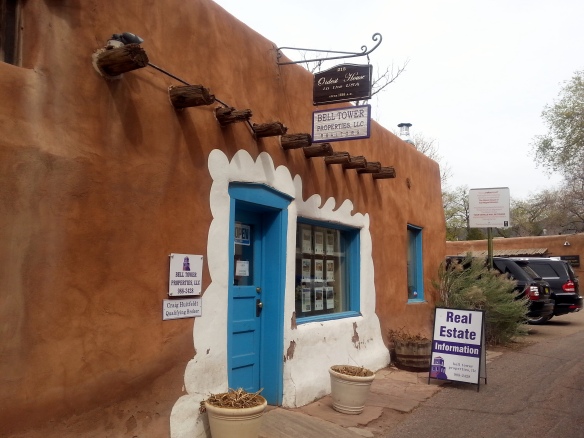 The oldest church – built in 1610.  The original bell, which is now in the sanctuary was cast in Spain in 1356.  I actually hit it with a small rubber hammer to hear its sweet peal. 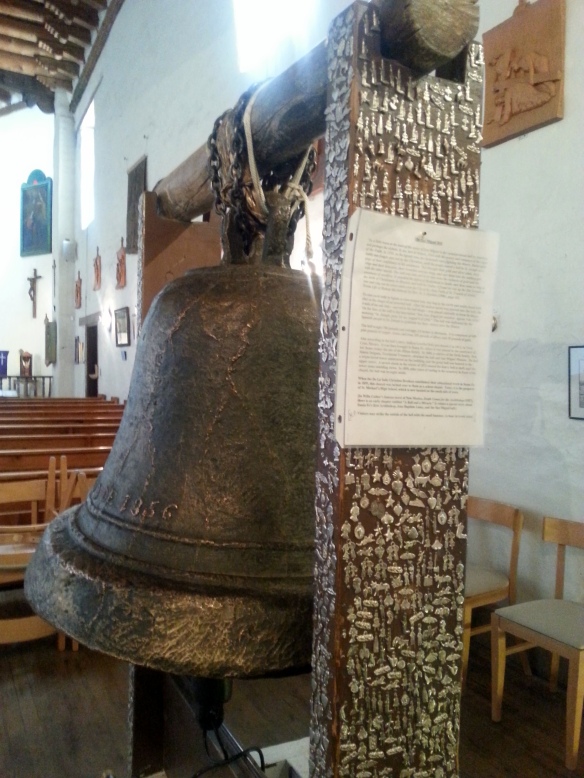 Santa Fe is also the oldest US State Capitol – didn’t get a chance to visit the Capitol building).  The Palace of Governors is also the oldest continuously occupied building in the US.  Constructed in the 1600s, it has seen many renovations.  It now houses the incredible New Mexico History Museum (you could easily spend two days there). 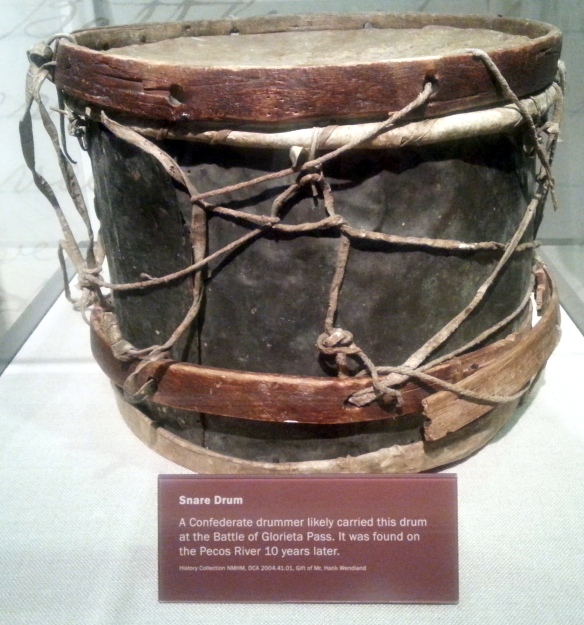 One section of the Museum was devoted to the Manhattan Project, the team that developed the first atomic bomb.  A stark white room is emblazoned with quotes from the scientists of the project and their families. 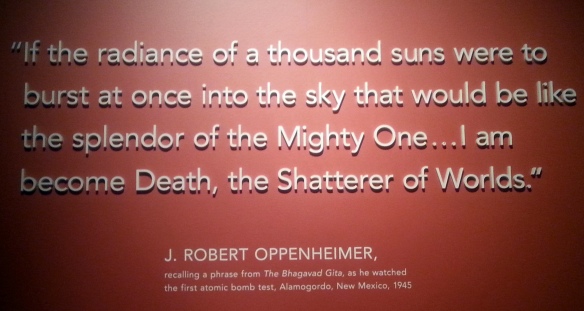 It’s sobering to see.  (There’s an excellent new book, written from the standpoint of the scientists’ wives. It’s called The Wives of Los Alamos by TaraShea Nesbit).  It was enlightening to have read this just a few weeks before seeing this area.

One area of the Museum was devoted to a collection of religious artifacts from the early church and missions.  It was stunning to see these sculptures, with their faded colors in such a huge assortment. I spent an amazing amount of time in these galleries.

The plaza outside the building housing the musem is home to a huge market of Native American crafts. (I’d be delighted to show you my new bracelet)

We visited the Georgia O’Keefe Museum, and were surprised to find that most of our time there was spent admiring the photos by Ansel Adams taken during the time in the ’50s that he spent with O’Keefe in Hawaii.  The next day, I visited the impressive Museum of Contemporary Native Art. 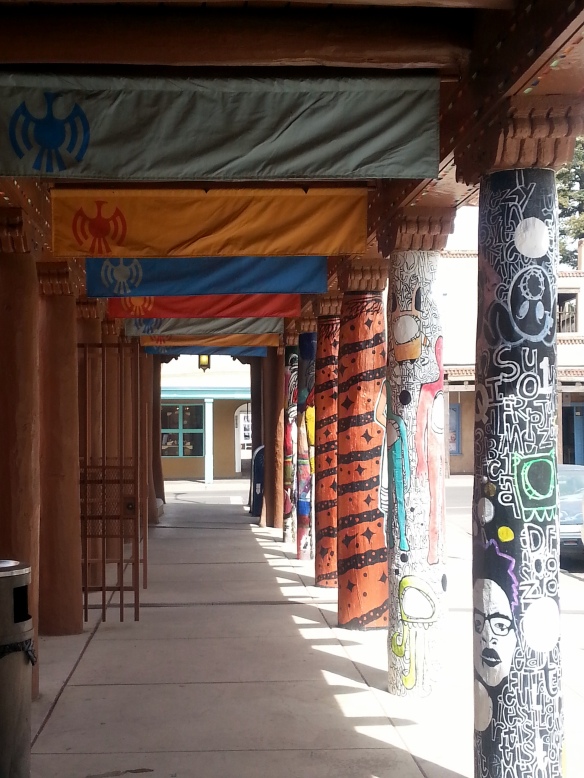 The Basillica of St. Francis of Assisi got plenty of our attention.  The old Mission churches of the Southwest use such vibrant color. 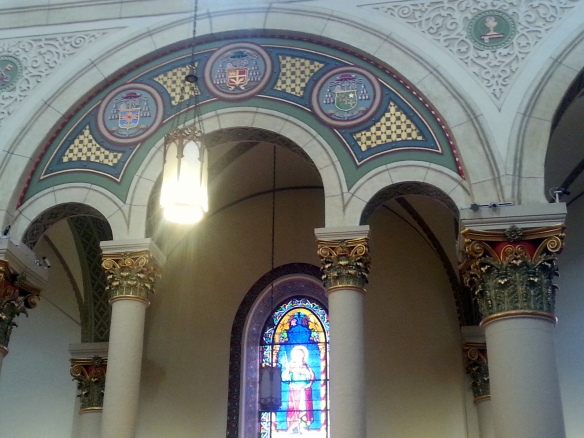 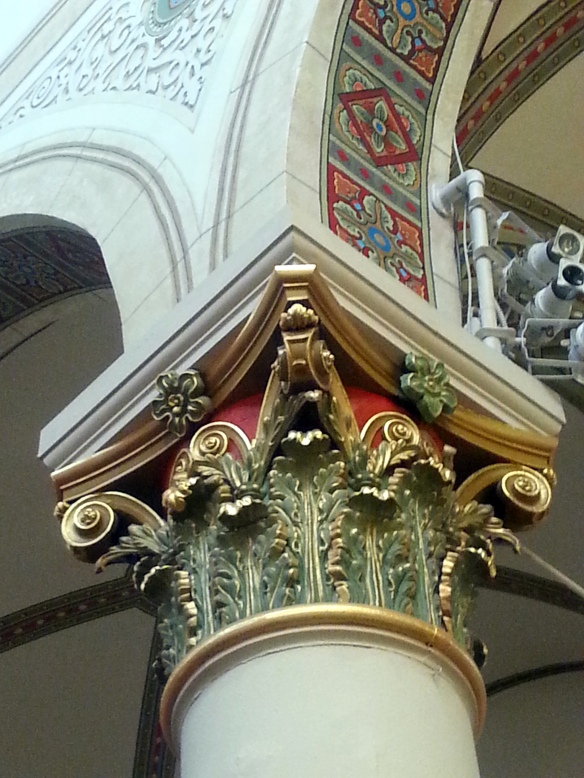 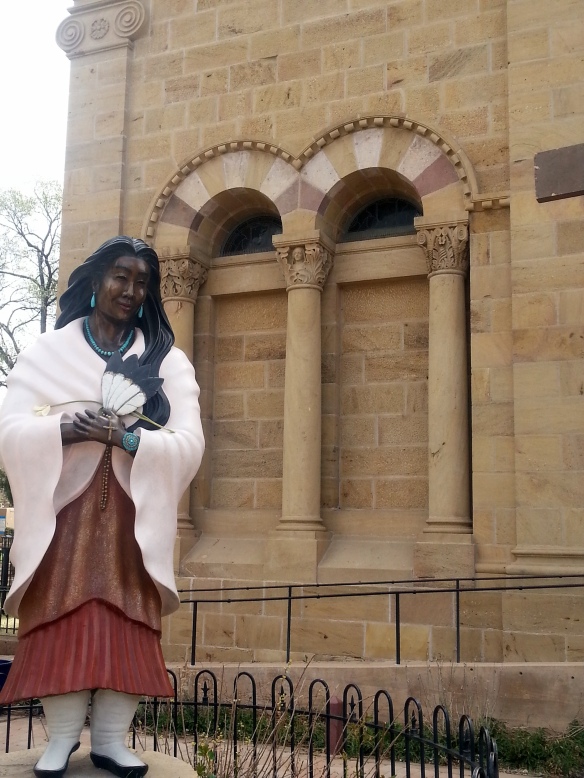 Kateri Tekakwitha, the first Indian of North America to be promoted a Saint

They draw are warm and welcoming.  I’m not Catholic, nor a church-goer, but I found myself wishing I could attend a Mass there, especially after seeing two Native American drums, and five (!) marimba-type instruments stashed behind the church organ. 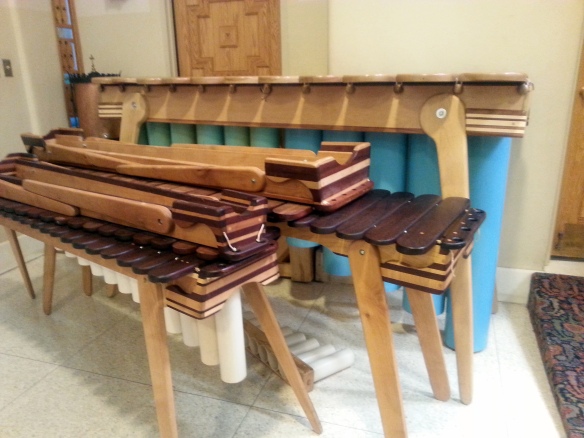 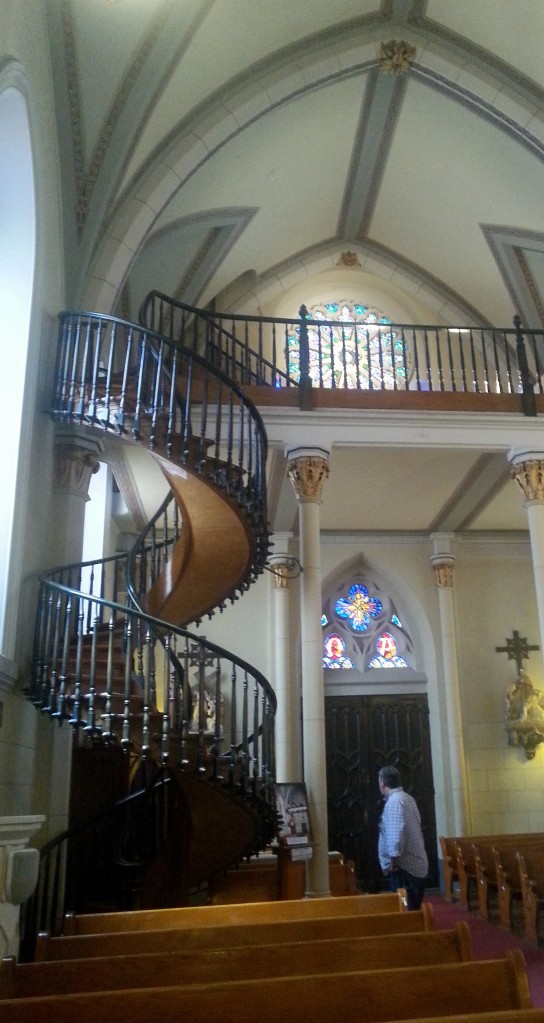 The legend is that the nuns prayed for a staircase to the church’s loft, to replace the ladder that was in use.  During the nighttime house, an unknown craftsman came each day and built this amazing staircase, anchored neither at the top nor bottom, in answer to their prayers.  This church is reportedly the first Gothic structure to be built in the US, modeled after Sainte Chapelle in Paris. 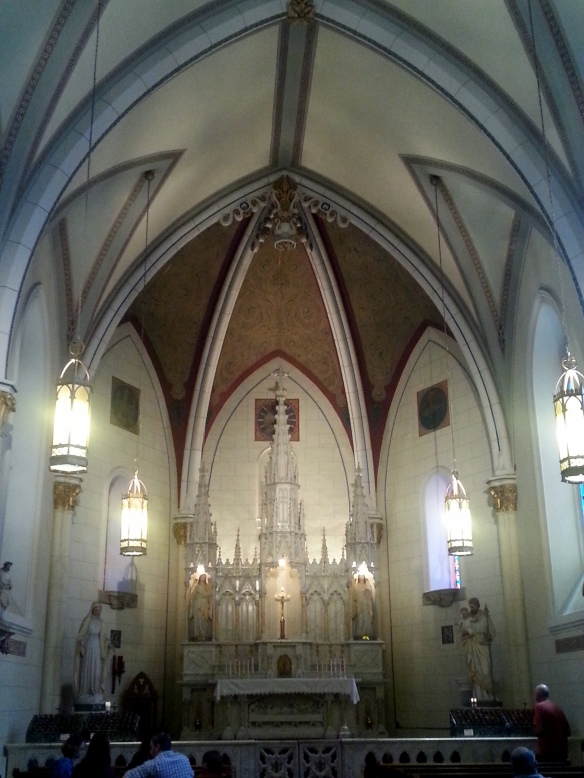 But, much of the beauty of Santa Fe is in the sheer joy of the outdoor space.  Colors play against the clear skies, sculpture and parks draw people who gather and actually talk to each other.  It’s a joyful, colorful, hopeful place.  I really had to tear myself away to head back to camp after traipsing around for six hours.

With all the history, much of the sheer joy (to me) of Santa Fe was in the beauty of the Spanish-influenced architecture, surrounded by spring gardens.  Abundant color and welcoming spaces are everywhere.  A better, more patient photographer would be a better tour guide than I am.  But, you gotta go with what you got.  So here’s the rest of the tour. 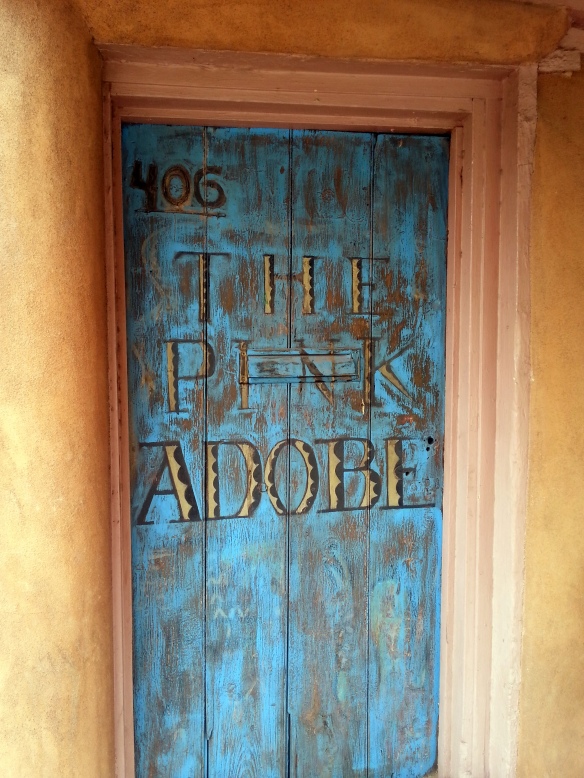 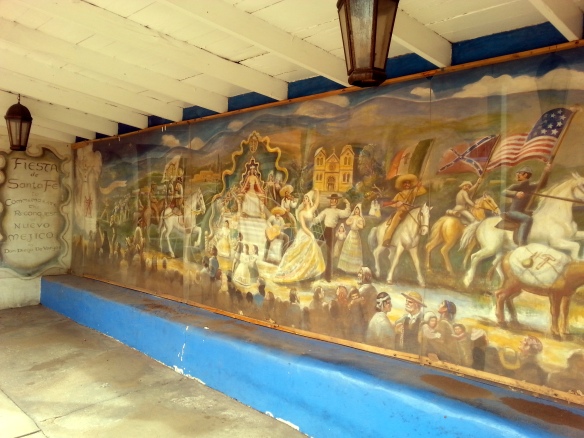 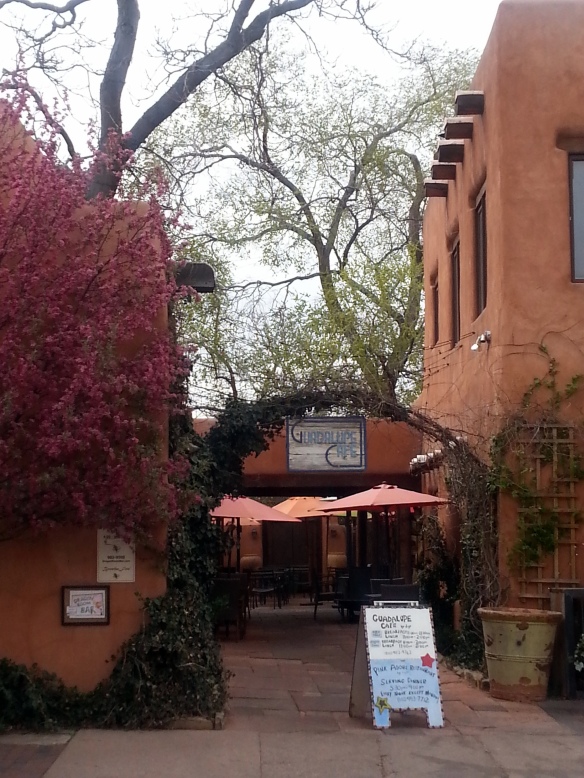 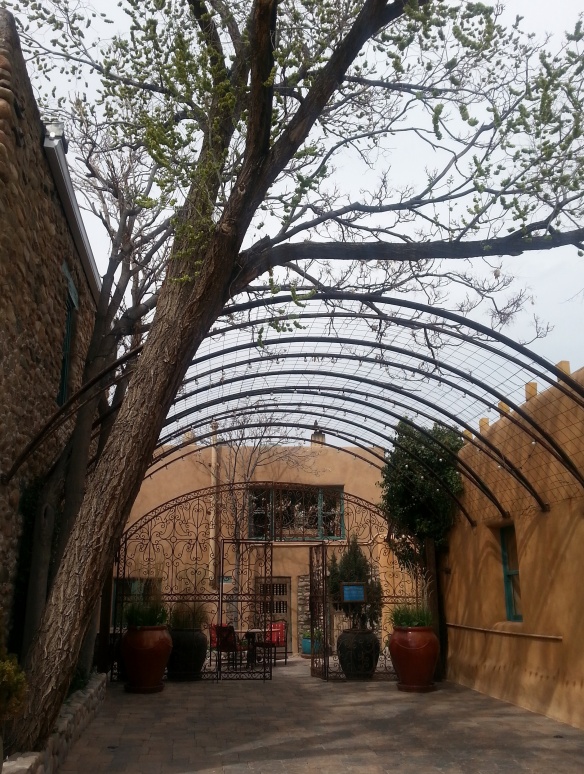 And a special shoutout to the painted wall alongside the bike path as we neared the downtown area.  Whether these were sanctioned or graffiti, they had our attention, and appreciation. 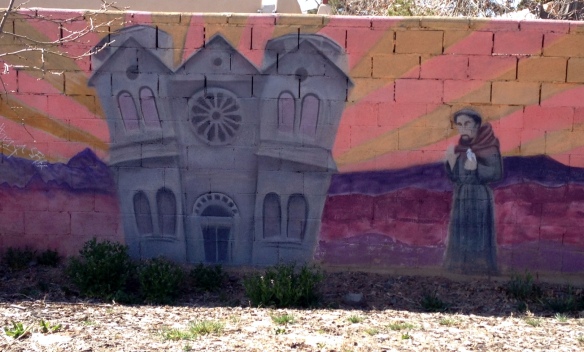 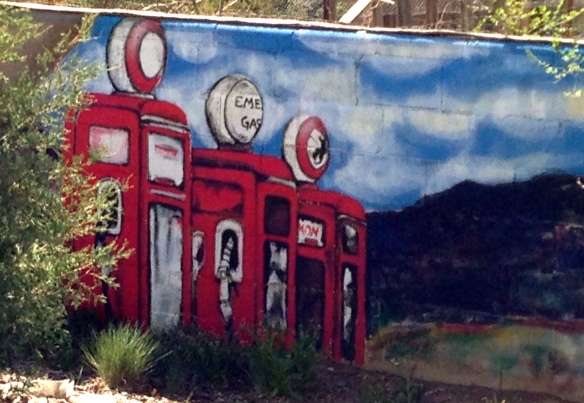 And these unique pillars alongside some of the bus stops (why would they glorify cars on a bus route?  We couldn’t quite figure that one out).

Next stop, some remote State Park in the NE corner of New Mexico with dinosaur tracks!